What are COB ‘dotless’ strip lights?

Our SSL or Seamless COB Strip Light is our newest LED strip light. Another name for this type of LED is COB (Chip on Board). The LEDs are soldered to a printed circuit board with a layer of phosphor that is poured over the LEDs. This creates a “dotless” effect which gives a more uniform dispersion of light. Applications, where the target surface or reflected surface is very close to the strip, will benefit from a more even glow of light.

Our flexible SSL (Seamless Strip Light) series creates a dotless line of light from start to finish. The all-new strip design Uses flip-chip LED technology to eliminate visible LED dots (hot spots). The all-new chip-on-board technology not only improves light quality but also Improves the thermal management and flexibility of the strip. The smaller LEDs can be packed tighter and weigh much less than the bulkier SMD 3040 or 5050 LEDs, creating a strip that can work in nearly any space. The spotless output makes the SSL ideal for display cases and backlighting, or where reflective surfaces such as granite and tile are used.

COB stands for Chip on Board in the LED market, which indicates that the LED die is packaged directly on the circuit board (PCB). On flexible strip lights, the ‘Chip on Board’ LED is also known as a flip-chip.

SEAMLESS COB  Strips Lights: How Are They Made?

Our LED Flex Strip lights are made with the same high-quality PCB as our other strip lights. The flip-chip LEDs are then positioned side by side down the middle of the strip light, so tightly that each meter of strip light has 512 LEDs! After a phosphor layer is applied to the LEDs, the strips are complete. This helps to regulate the color temperature while also protecting the tiny flip-chip LEDs beneath.

Even in small spaces, there are no LED hotspots!

The presence of hotspots throughout a typical LED flex strip is one of the most common complaints. A hotspot refers to the brighter portions of a fixture or strip where the source of the light can be seen plainly. When light appears to be a smooth source of light rather than a splotchy jumble, it is far more inviting and appealing.

The larger-sized diodes in 5050 SMD Flex Strips are packed close enough together that the light is spread out and consistent on the surface being illuminated from a distance, but if the lights are too close to the surface of the strips themselves are visible, the hotspots are an eyesore that the human eye cannot ignore.

It would be difficult to find any hotspots on the COB Flex Strips with 512 LEDs/M. From start to finish, the strip emits a smooth, continuous light. The homogeneous light has no black areas and is far more appealing to the human eye, emitting a consistent light even in cramped spaces. The only way to see hotspots is to look at the back of the strip, where the individually positioned flip-chip LEDs are easier to view. Only by dimming the strips to roughly 5% light output will you be able to see the individual LEDs. COB Flex Strips are therefore appropriate for situations where: 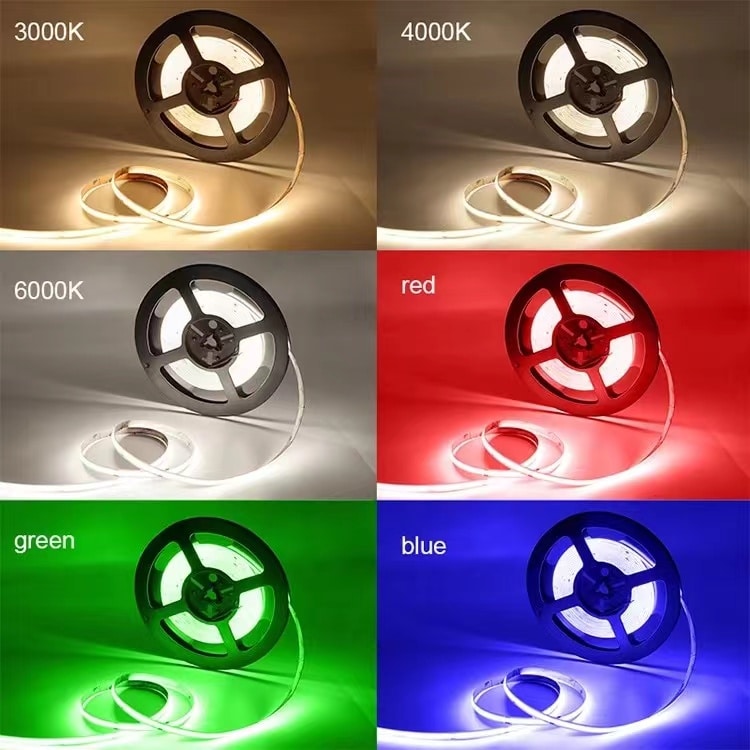